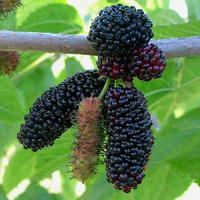 Cradle of mulberry, thus the black variety, is perhaps Asia, the region of modern Iran and Afghanistan. Already in antiquity, but they also knew the Egyptians, Romans and Greeks. Europe has expanded, perhaps as early as the sixth century. White mulberry variety, however, comes from China and Korea. In Europe, it began to grow in the sixteenth century, particularly for the silk industry. North America is home red mulberry, which, however, in Europe grown rarely. A separate species is also sometimes considered mulberry Trnava, a hybrid of undetermined origin, which is grown in Moravia and Slovak more than 200 years.
Deciduous trees with different leaves
Mulberry trees are deciduous late budding trees, sometimes shrubs that typically variability of the shapes of leaves that are ovate to irregular, three to pětilaločnaté. Adult males reach a height of 8-12 meters and have remarkable regenerative ability that ensures their longevity. Black mulberry is a tree trunk with gray and reddish-brown branches that reach during the intensive growth of yellowish gray color. White mulberry has flounder trunk and branches.
Mulberries as food for caterpillars
This variety of mulberry are spread throughout Europe thanks to the cultivation of silkworms. Later, it began its cultivation decline due to the introduction of the production of synthetic silk fibers, but also thanks to the expansion of pests leaves grazed her with the same taste as the silkworm. Now the white mulberry is the best food for the caterpillars hedvábníka. After the leaves of the black mulberry silk spinners of only medium quality.
Maruše as medicine and dye
Mulberry is not only appropriate food for the silkworm, but also a popular drug. Already in ancient times it was used as a cure digestive and antibiotic properties. Dyed her through but also wine. In Central Asia, they have always been people dried and ground to flour that added to the dough. Mulberry replacing them with sugar.
delicious fruit
Mulberry Mulberry but also very tasty fruit. From its fruits can be prepared juice or syrup, but they may also be treated as compote. From the white fruit is produced cider honey taste. It is known, however, wine